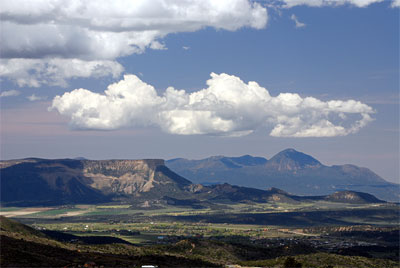 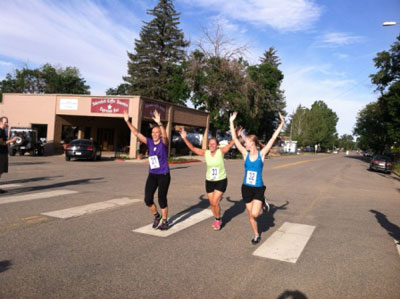 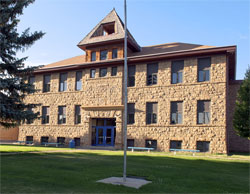 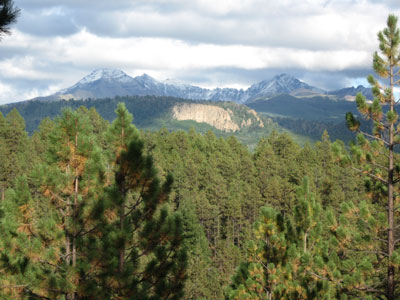 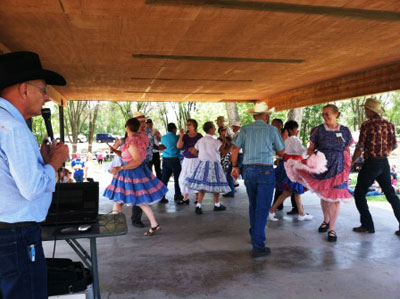 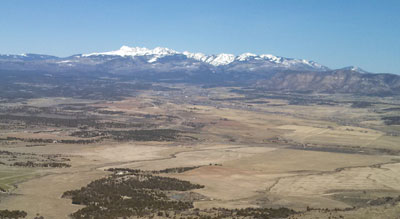 Click to visit the Mancos Valley Chamber of Commerce website for places to stay and things to do in Mancos.

Mancos is located in southwest Colorado, between Durango and Cortez on US 160. It is five miles east of the entrance to Mesa Verde National Park, and about 40 miles northeast of the Four Corners Monument.

The Mancos School District serves the Town and outlying areas. The building that houses the Mancos High School is the oldest school building in Colorado that is still used as a school. It is on the National Register of Historic Places.

The Town sits at 7,000 feet above sea level. The Mancos Valley is surrounded by the La Plata Mountains on one side, and the spectacular cliffs of Mesa Verde on the other. A few miles north is Jackson Gulch Reservoir (fishing), Mancos State Park (mountain biking), and Chicken Creek Cross-country Ski Area (also good for snowshoeing).

Due to its proximity to a variety of outdoor attractions, Mancos is a destination for tourists, as well as people just looking to “get away from it all.” Cool summers, snowy winters, Mancos receives about 300 days of sunshine per year. Fishing, hiking, camping, bicycling,and horse-back riding are all part of the norm. Five miles to the west is Mesa Verde National Park. Further west are Cortez and the Canyons of the Ancients National Monument.

Town History
The Town was founded in 1894, though cattle ranchers had been settling the Mancos Valley since the 1870s. Before then, the area had been a part of New Spain and Mexico, and had been inhabited by the Ute and Navajo people. The name “Mancos” comes from the famous Dominguez-Escalante Expedition of 1776, though the reason for the name remains unclear. Somewhere in the town is the point at which the Expedition crossed the Rio Mancos on its way to California from Old Mexico.

At the time it was founded, Mancos served as the primary commercial trading center for eastern Montezuma County, rivaling the Town of Dolores further north. At that time, the City of Cortez, now the County seat, was barely a bend in the wagon trail.

Mancos was a stop along the Denver, Rio Grande & Southern Railway, connecting to Durango to the east, and to the Telluride mining districts up north, via Dolores. Ranchers in the Mancos Valley provided beef, timber, and other agricultural products to the mining camps.

The first known inhabitants of the Mancos Valley and the surrounding Four Corners region were the ancestral Pueblo Indians. Evidence of their culture can be found throughout the area, including the magnificent cliff dwellings at Mesa Verde National Park and at the Ute Mountain Ute Tribal Park. The Anasazi Heritage Center in Dolores supports a museum and research center. For more information, contact the Mancos Valley Chamber of Commerce.

Mancos is located along the San Juan Skyway, part of the Colorado Scenic Byways program. It is served by US 160 from Durango or Cortez, and by CO 184 from Telluride and Dolores. It is about an eight hour drive from Denver or about a four hour drive from Albuquerque, New Mexico.

The nearest airport is in Cortez. Mesa Airlines provides daily round-trip flights between Cortez and Denver. Farmington, New Mexico and Durango also have airports with regional connections to Denver, Albuquerque, Houston and Phoenix.